There are some websites that promise you a lot of money for doing surveys. One of such sites is Take Surveys for Cash. Let’s take a closer look at this site and see if it’s a scam or a legitimate website that will really help you make some good money online. 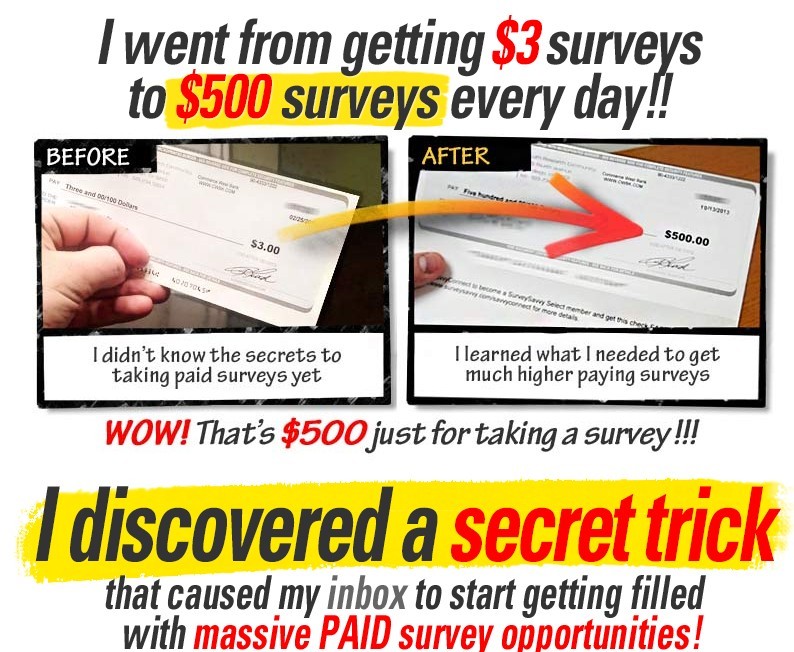 The website supposed to belong to Jason White, who names himself the “King of Paid Surveys”. He claims that he discovered the trick that allows him to make a lot of money doing surveys. How much money? $3,500 per month.

So, $3,500 per month with the surveys is simply impossible. This is the first red flag on the website. If you would make so much money with surveys would you bother to sell Take Cash for Surveys on Clickbank? If you know the secret to making a lot of money with surveys, would you reveal this secret to many people for a few dollars?

You know that if a lot of people knows the secret how to make a lot of money easily, it isn’t a secret anymore, and the opportunity will be gone (if there ever was such an opportunity in the first place).

Another red flag is Jason White and his fake photos where he shows the checks he gets for the surveys. The photos don’t look real at all.

You can’t see the face of Jason White nor learn anything about him. There’s no About Me page. Any honest and decent website owner who is legitimate or who is trying to look legitimate, will have About Me page, so people can know who is behind a website or product.

There’s nothing about Jason White that you can verify. I really wonder if Jason White is a real person.

I saw the Take Cash for Surveys first in Poland. I was surprised that he claimed that there are 691 surveys as of June 17 available in Poland. It was hard for me to believe it, so I used VPN and checked the website from the USA IP.

In the USA there were also exactly 691 surveys available as of June 17. He also claimed these are live stats.

So, I used the Australian IP and the info was exactly the same – 691 surveys available in Australia as of June 17.

So, the flags and the name of the countries change, but everything else is the same. So, obviously the marketing and the sales page is one big lie. It’s designed that way to make you believe it’s real, but actually the numbers are fake.

You can see below the info about available surveys in Poland: 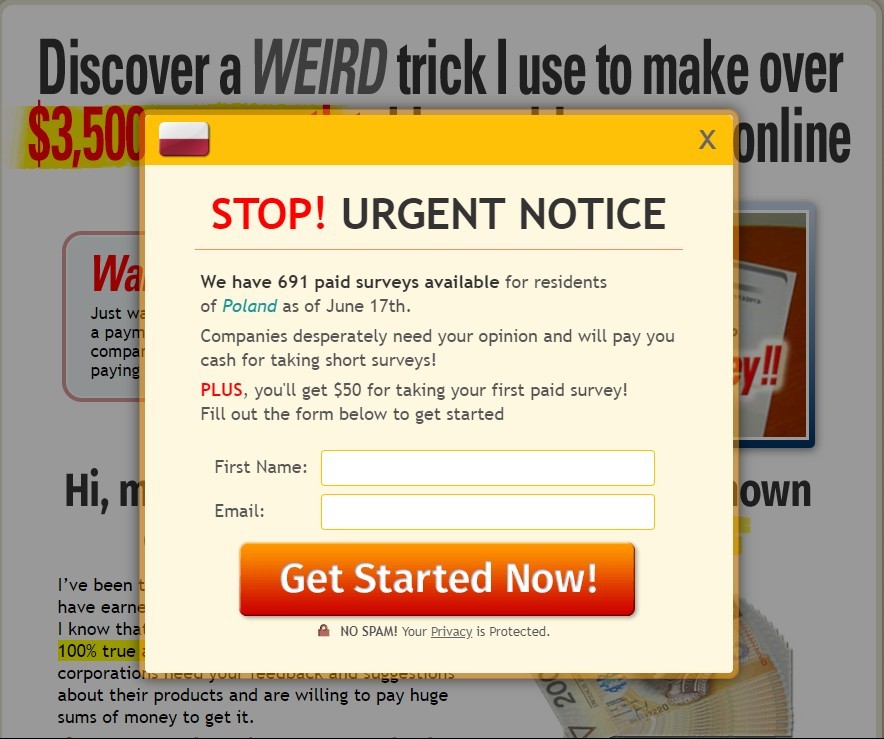 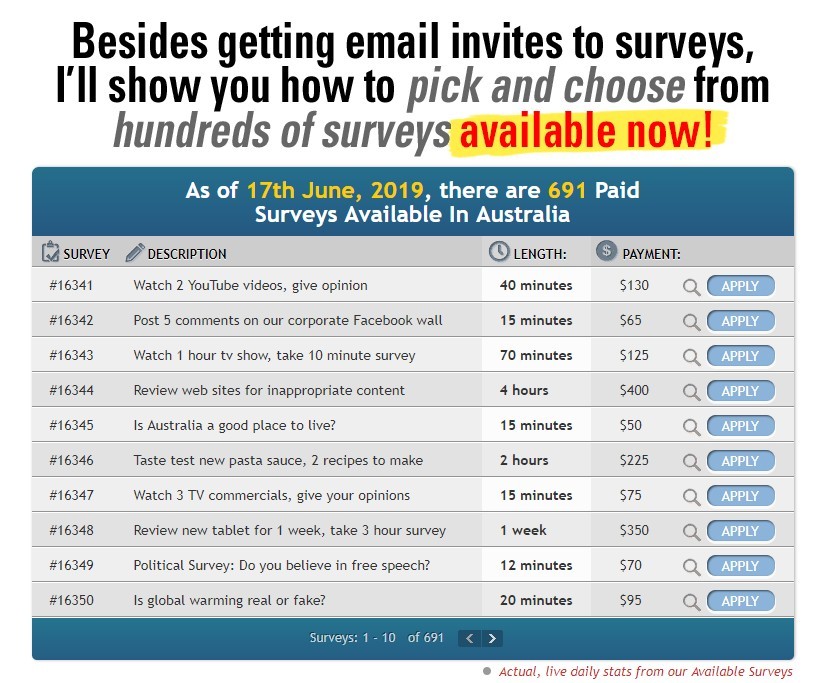 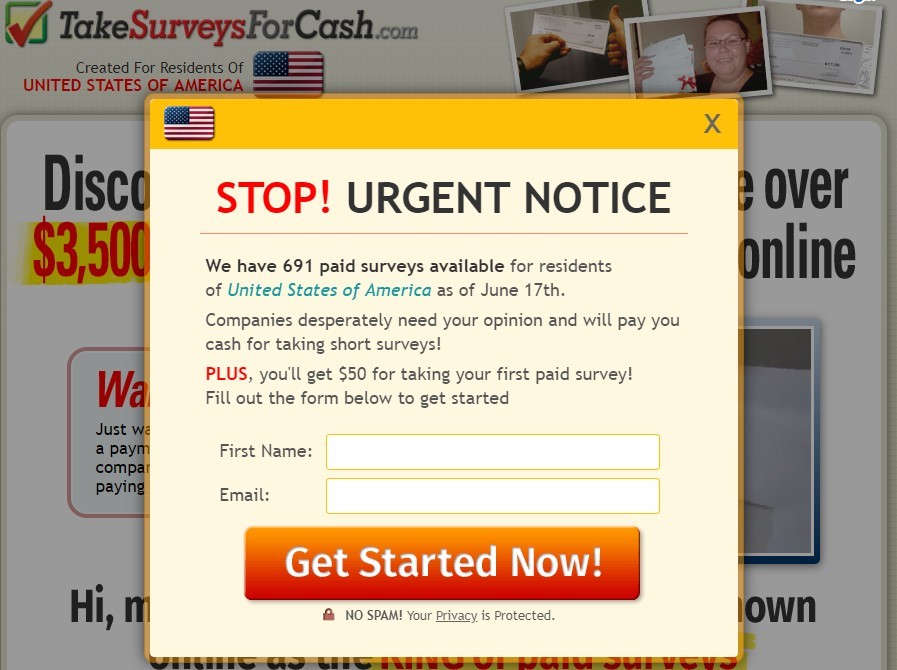 I don’t believe there’s exactly the same number of surveys available in Poland, Australia and the USA. In the USA where the market is much bigger than in the other countries and the surveys are much more popular, should be more survey sites available.

Just the lies on the homepage of the website should be enough to convince people to stay away from this product, but let’s see more.

You can’t find the price on the page. Only the promises about how much money you’ll make with the surveys if you subscribe to Take Surveys for Cash.

If you enter your email and your name, Jason White supposed to show you how to take your first $50 with a paid survey. I did it to test it and to see the price, because I did not think it’ll be free.

On the next page that came up there is the price $37, but if you don’t decide to buy and click back, the price goes down to $27. Later it goes down to $12. It means the owner is desperate to sell the product. The man who makes $3,500 a month with surveys want to sell his secret lowering the price from $37 to $12. Why? I can’t be sure, but I have my theory.

I think the owner gets commissions from the survey companies that you’ll sign up to through him. So, even if you ask for your money back from him, when you realize it wasn’t worth the money and your time, he still has made some money off you in the meantime.

I suspect he does not make any money from taking surveys himself, but only from selling his product via many Clickbank affiliates, and from the commissions from the survey companies.

The product is sold via Clickbank, so you have the iron clad 60 days money back guarantee. This is the only good think about this product. It means even if you decide to buy it and you see it’s a scam you can get your money back.

There are two upsells offered after you pay for Take Surveys for Cash and they are 1 click upsells. It means that after you click on the link to the upsell offer, there won’t be the page where you pay, you pay automatically. Be aware of this, because in this way you can easily buy the upsell without really wanting to do it. It’s quite a sneaky way of making money with upsells.

There’s no doubt for me that it isn’t a legitimate survey offer. It’s a scam. If you really want to make some money with surveys, you should find survey sites yourself, without any intermediaries. You should stay away from Take Cash for Surveys.

To be honest making money online with surveys is just a waste of time. You can make very little money this way. You should not waste your time in such way. There are genuine online opportunities to make money online in a legit way.

If you’re really serious about making money online and would like to build your own online business, then you should read my review of Wealthy Affiliate.

With Wealthy Affiliate, you can learn how to make money online with affiliate marketing, which is the best way of making money online nowadays.